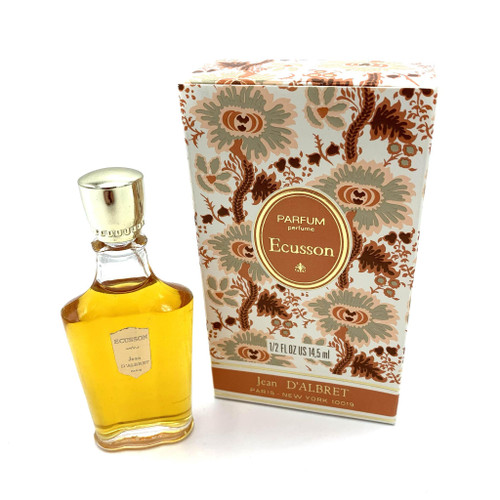 1960s Ecusson Parfum By Jean D'Albret. Bottle of 0.5 fl.oz. Box and bottle are in like new condition.

Ecusson was launched in 1947 in France by Jean d’Albret and was introduced to the United States in 1951.

Ecusson means "Coat of Arms" in French, it was advertised as having a history traceable to the fabulous French era of the 1570's where it was first introduced into the court of Jeanne d' Albret, mother of King Henry IV and its formula carefully guarded. The legend goes on to say that it was created for Marshall Alphonse d'Ornano, who was considered to be a connoisseur of perfumes, by an ancient chemist who entertained an envious reputation for his perfumes that were the toast of Paris. (Credit: Cleopatra's Boudoir Perfume Database/catalogue)