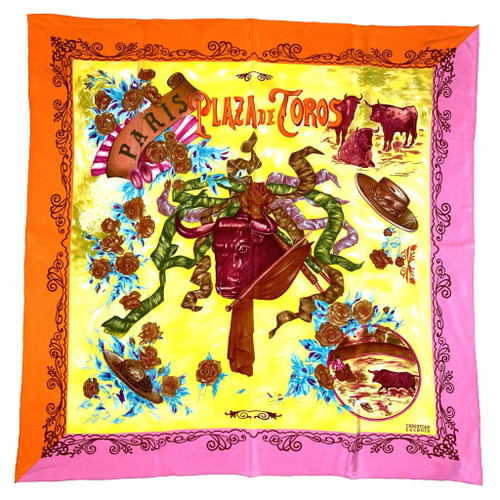 1990s Christian LaCroix Plaza De Toros Print Silk Scarf. This soft silk scarf features a breathtaking print of the Plaza De Toros bull fighting ring, in a late 19th century poster inspired design. The colors on this piece are outrageously bright pinks, yellows & oranges with bright turquoise & green accents that shimmer in the light - Which are Christian LaCroix design signatures. The bottom right of the scarf reads "Christian LaCroix" as well as a care tag attached reading "100% silk - Made In Italy" Edges of scarf are meticulously hand rolled. This scarf is in excellent vintage condition.

In 1987, Christian Lacroix launched his eponymous fashion house with the backing of LVMH magnate Bernard Arnault and his first haute couture show was a runaway success. Critics, so used to the minimalist Japanese aesthetic that had dominated the scene throughout the decade, were blown away by its playfulness with colors, fabrics, intricate detailing and theatricality. Central to the Parisian’s collection was the pouf, an inventive, exaggeratedly puffy skirt, which set down a marker for a new era in fashion. Hailed as a design savior, Lacroix quickly expanded his operations to include a ready-to-wear line, jeans, perfume, menswear, childrenswear, lingerie, and homeware.